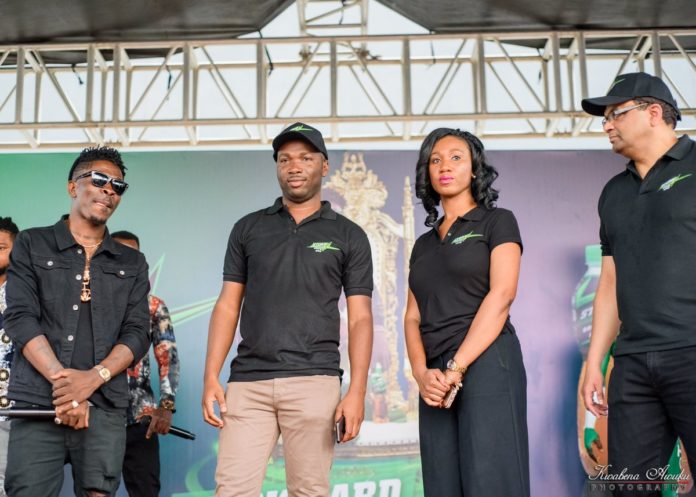 The dancehall artiste was reported to have posted a pornographic video on Snapchat, whereby a girl who could best pass out as a prostitute is seen giving him and his friend a Blow Job.

Shatta Wale minutes after realising his status as a brand ambassador of several Ghanaian products, deleted it but it had already been captured by the internet

Many entertainment enthusiasts and loyal Shatta Movement (SM) fans condemned the act by the artiste with others calling on managements of the notable products he is made a brand ambassador to terminate his contract.

But, Kasapafmonline.com’s interaction with Chris Addo-Sarkodie indicates that management of the award winning manufacturers of alcoholic and non-alcoholic beverages will not terminate the ambassadorial contract with Shatta Wale.

At the unveiling of Actress Nana Ama McBrown as Kasapreko’s new brand ambassador for its Royal Drinks, Addo-Sarkodie disclosed to Kasapafmonline.com how the dancehall artiste brand has positively affected the Storm Energy drink and increase in market sales since Shatta Wale was made a brand ambassador of the product.

The Director of Sales and Marketing for Awake Water and Carbonated Soft Drinks at Kasapreko Company Limited, Mrs. Eunice Adjei Bonsu when asked if management is considering abrogating the ambassadorial deal with the Zylofon artiste, said “No comment about Shatta Wale, storm energy deal.”

Management of Kasapreko Company Limited presented the Energy Drink of the Year Award to the distributors of the product at a ceremony in Accra.

Storm Energy, which was introduced into the market two years ago, was adjudged the Best Energy Drink in Ghana at the 2018 Ghana Beverage Awards.

The Ghana Beverage Awards instituted last year, is aimed at honouring best performing indigenous and foreign beverage companies in Ghana for their contributions to the country’s economy.

I have a mansion full of deep things to reveal -Bullet...