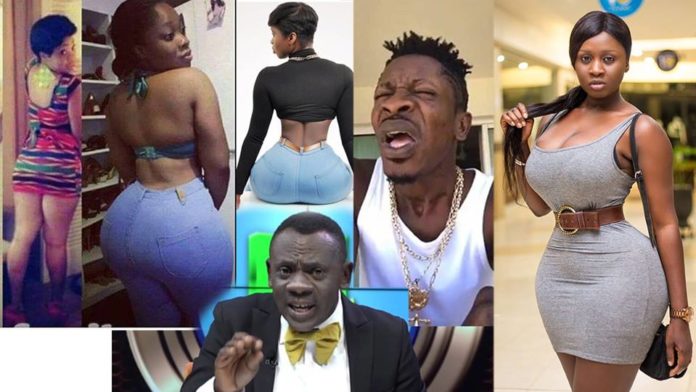 In as much as People admire being addressed with nice nickies, Certain nicknames make people feel quite uncomfortable.

And Tell You what? It is often the “Unwanted ” nicknames that stick for ages. Did you have a nickname back in high school? Were U proud of it?

Thing is, more often than not, people allocate to themselves the nicest and cutest of nicknames. Oo Yea, it feels awesome and special to be known by the Nicky one admires. But hey, being tagged with a weird nickname could be very irritating.

Which Ghanaian celebs have the Most Unpleasant Nickies?

Gbee Nabu is a nickname SM fans aren’t proud of at all. Gbee Naabu Casts a direct slur on Popular Singer & hitmaker, Shatta Wale. The Acclaimed dancehall Star was given the name by fellow firebrand artiste, Yaa Pono during their infamous lyrical War.

Now! Saying the name in the midst of Sm Fans may not be the wisest thing to do; A Word to the wise is enough.

The beef between Yaa Pono & Shatta Wale may have ended long ago BUT Gbee Nabu tag still lives on.

AKROBETO a.k.a Who “Nose” Tomorrow

Akrobeto’s face carries a heavy load; the load is mighty. Can someone help me with the Famous Slogan of Mighty Power Bitters? – ” 3si h) Potiiii”

Which load are we referring to here? I.e Akrobeto’s Nose. Funny thing is, fans have Nicknamed the award winning actor “Who Nose Tomorrow” in allusion to his NOSE. It is not the most pleasant of Nicknames, but it appears Akrobeto enjoys it very well.

A search on Internet put Princess Shyngles across as an actress But The Truth is, her Curves & ” tinny Waist looks far prominent than her career. The Ghana based Gambian’s real claim to fame is her tinny & charming waist.

No two ways about that, Her waist is cute, Oo Yes! It is magical, Very attractive BUT not Mustapha, Ask Essien & D-Black, She’s got it all, it’s quite alluring , You simply can’t control it, God Damn It! That Curve is simply irresistible.

Sad thing is when you look , You can’t help it but come fast…Lol. No wonder 99.9% of her ex’s couldn’t satisfy her, It makes a lot of sense.

Princess Shyngles has been nicknamed Princess “Tapoli” as fans see a striking semblance between her tinny mid-session & “Tapoli” a popular wooden household item used for grinding.

So the name Tapoli is very well deserved.

Interestingly, it is her bodacious figure, rather than any other thing (Her acting Skills) that draws attention to her.

Obenfo Hospital is a medical facility noted for performing miraculous “Body Sculpting” Surgeries. No doubt about that (In Ayitey Powers Voice) Lol

Funnily Moesha’s before & after photographs show the Instagram model used to have a relatively flat butt.

Bottom Line is, Critics believe only a body sculpting session at OBENFO could be responsible for Moesha’s wild, wicked & well-endowed Baka.

NB: This is just for FUN. No hard feelings.