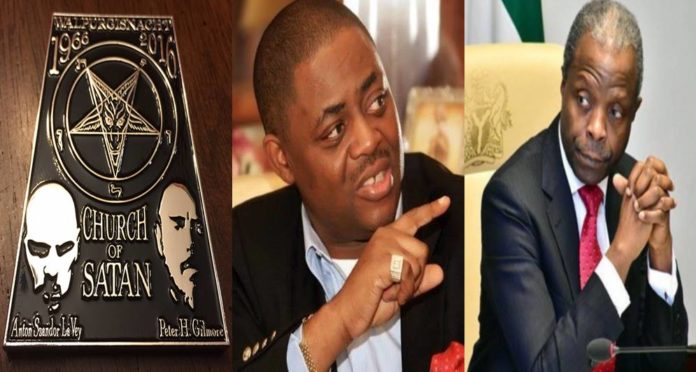 Church of Satan has reacted after Femi Fani-Kayode slammed acting president, Yemi Osinbajo, calling him an emissary of Satan, who betrayed the Church.

It all started when Osinbajo said that many pastors in Nigeria now concentrate more on preaching prosperity than against corruption.

His statement provoked FFK who said that he has no moral right to blame pastors for not speaking up against corruption in the country, because he equally betrayed the body of Christ.

“Vice President Yemi Osinbajo has condemned Church leaders for not supporting Buhari’s FAKE anti-corruption war yet he refuses to condemn the genocide, ethnic cleansing and mass murder that Christians have been subjected to in Nigeria. Shame on him!

“A so-called ‘Pastor’ that refuses to respect CAN, stand up for the Church, protect the rights of Christians and honor the Living God ought to be treated with contempt.
He ought to be excommunicated from the Church and damned for eternity. Supporting and serving those that hate Christians and that seek to wipe out the Christian faith is disgraceful.

“Osinbajo represents everything that is treacherous, ungodly, unholy, weak, cowardly, reprehensible and unacceptable.

“He is not a servant of God but an emissary of satan. He has betrayed the Church. He is the Judas of our time.”

However reacting to this claim, The Church of Satan wrote;

Are you fucking serious with this shit Nigeria? 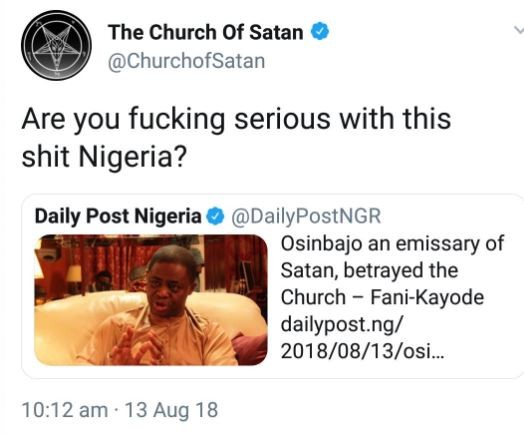