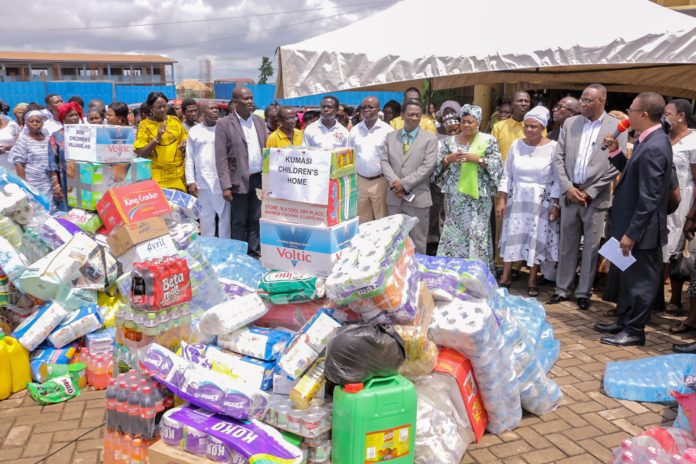 The Bantama Central Branch of the Christ Apostolic Church Internation(CACI) today donated cash and items worth over GHS33,000 to five orphanage homes in the Ashanti Region as part of activities to climax their 40days fasting and prayers programme.

The items donated included bags of rice, assorted drinks, cooking oil, packs of biscuit and toiletries. Others were cartons of milk, milo, and some dairy products.

Presenting the items, Apostle Samuel Cosmos Kojo Akomeah, Area Head of the Christ Apostolic Church International, Bantama said the gesture was a demonstration in practical term of God’s love through the Church to give to the needy in society.

He said the Church trusted that God would sustain the home, its management, and the children adding by such donations and other acts of kindness, the children would belong to a true family.

“We believe that as a Church we need to make an impact in the lives of people through community service, and this is our way of giving back to society just like the scripture states,” Apostle Samuel Cosmos Kojo Akomeah said.

He also disclosed that, this wouldn’t be the last of such gesture and that they will embark on missionary work in the Northern part of Ghana as part of giving back to society.

He said the support shown to the SOS Children’s Village and the other orphanage homes which benefitted from the donation would go a long way in running the homes and also called for support from other bodies.

The Mayor of Kumasi Metropolitan Assembly, Hon Osei Assibey-Antwi who graced the occasion also lauded the church for such a worthy cause.