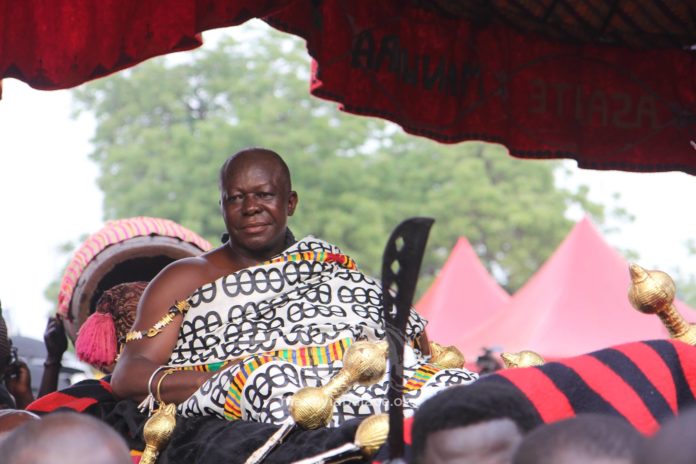 The Manhyia Palace, the official seat of Asantehene, Otumfuo Osei Tutu II, has confirmed that the monarch will travel to Kyebi in the Eastern Region on Thursday, August 23, this year.

According to Baffuor Kantankrankyi, a linguist of the Asantehene, the monarch would be a special guest of honour at the grand durbar of chiefs and people of Akyem Abuakwa to honour the memory of former Okyenhene Nana Ofori Atta.

Baffuor Kantankrankyi made the announcement during Akwasidae at the Manhyia Palace on Sunday, which was attended by President Akufo-Addo and some top government officials.

The Asantehene was also sitting in state when the announcement was made by the linguist.

It is expected that Asantehene would be accompanied by dozens of paramount chiefs from Asanteman during the historical journey.

“The Okyenhene has extended a royal invitation to the Asantehene to be the special guest of honour during a grand durbar to honour the memory of Nana Ofori Atta and he has accepted it, the linguist said.

“The people of Asanteman and Okyeman are one people and so the Asantehene’s decision to accept the invitation would cement that positive relationship,” Kantankrankyi added.

He said the Asantehene and his delegation would be welcomed by the Okyenhene and his elders at Ofori Panin Fie at Kyebi before the commencement of the main event in the afternoon.