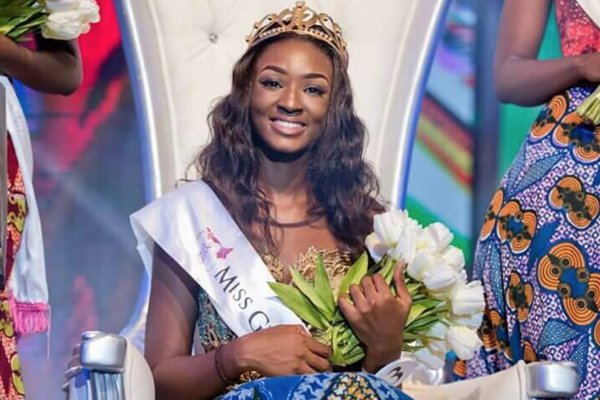 Winner of the 2017 edition of the Miss Ghana beauty pageant Margaret Dery has resigned.

The beauty queen, who was crowned on Saturday, October 7, 2017, at the Banquet Hall of the State House in Accra, says she is no longer interested in holding the office as Ghana’s beauty queen.

Hitz @ 1 gathers that Miss Dery, just after eight months as queen has sent an email to the organisers, Exclusive Events Ghana, to formally inform them of her decision.

While the reason for her resignation is unclear, Hitz @ 1 gathers that the beauty queen had tried some months ago to relinquish the crown but was persuaded by her family not to.

Reliable sources have disclosed that there was a meeting between her and the organisers in a last attempt to salvage sour relationship between them. However, the meeting could not save the situation.

The 2017 winner of Ghana’s foremost beauty pageant, recently took to Twitter to vent her anger at the organisers.

A recent commissioning of a water project and donation to the Babuli Witch Camp in Gushegu in the Northern region raised eyebrows after Margaret Dery was conspicuously missing from the event.

That event, which was an initiative of Miss Ghana 2012, was rather attended by Afua Asieduwaa Akrofi, who was also the 1st runner-up at the Miss Ghana 2015 pageant.

Attempts by Hitz @1 to reach the organisers of the pageant for a reaction has proved futile.

Meanwhile, Exclusive Events Ghana is set to launch the 2018 edition of the pageant on August 2.

Struggles, Disappointments, and an Undying spirit on the journey to building Seloart -The Selorm...

Awal Jabs Fameye For Failing To Sing ‘Their’ Song During A Live TV Interview...