Home ENTERTAINMENT I will project Ghana to the world; especially our norms, culture, and...
Facebook
Twitter
Google+
WhatsApp 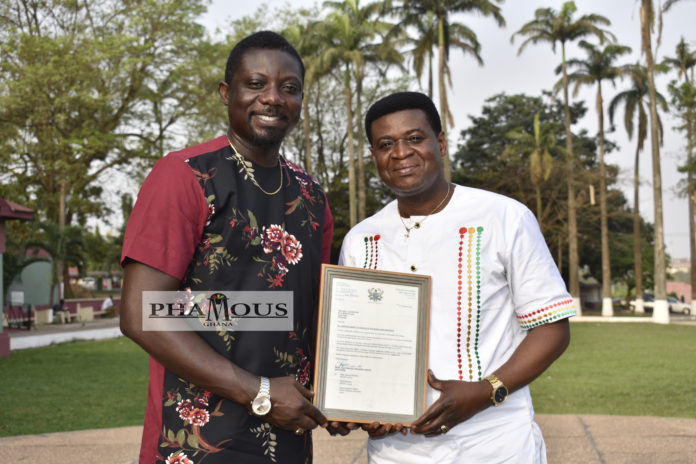 New tourism ambassador and Ghanaian actor Bill Asamoah has expressed optimism that his new role will help translate into revenue for the creative arts industry.

The ambassador who was named early February believes promoting arts and culture especially in the Ashanti region holds a lot of prospects for the hospitality business.

Bill Asamoah speaking to phamousghana.com after paying a courtesy call on the Director of the Centre for National Culture, Kumasi on Friday, February 15, 2019, mentioned that with the help of other key stakeholders and players in the creative arts industry, he will achieve his dream of making Ghana the destination of choice.

“We’re looking at first and foremost domestic tourism which is one thing people don’t actually do when it comes to Ghana.”

“We’ve got a lot of sites in the Ashanti region, we’ve got Lake Bosomtwe, Manhyia Palace, Bobiri Butterfly Sanctuary, Bonwire, and Adanwomase Kente towns, the museums, and other tourists sites that when it is projected well, people from across the country and outside will visit.”

He added “visitors will sleep in hotels, buy food, buy artifacts and this will generate some revenue into the local economy. The vision is to see Ghana on a higher pedestal or project Ghana to the outside world; especially our norms, culture, traditions and how we do our things.”

The Director of the Centre for National Culture, Barima Asumadu Sakyi also tasked the new tourism ambassador to lead the task of promoting local content on the various media platforms.

He bemoaned the influx of foreign entertainment shows on Ghanaian media space.

“The more the industry grows, the more the revenue also comes. For now, I understand the film industry is a bit low now because after the premiering, people who are supposed to sell the films, also becomes a challenge.”

“It also looks as if, Ghanaians are now more interested in foreign stuff. In our film industry, people patronize more of Nigerian and western films than our own so it is something that we need somebody to speak against. I believe this is one of the avenues that Bill needs to consider.”

Other dignitaries who graced the occasion include executives of the Ghana Actors Guild, Creative Arts for Development, Film Producers Association of Ghana, Okyerema Entertainment and academia.

Phamous Ghana - January 14, 2020
345
Ghana is and has always been known for it's wide range of tourist attractions and facilities. For the traveller, Ghana is that...