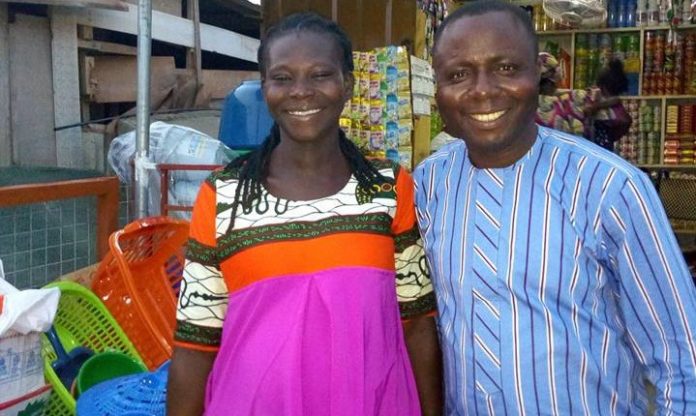 A heavily pregnant,  Ama Nima who was sentenced to five years at the Kumasi Female Prison can now afford to smile after she was not only released from prison but has been given a means of living.

Her sad story has become a joyful one as the NGO which discovered her plight has gotten for her an apartment and a full stocked provision shop.

According to Ibrahim Oppong Kwarteng who runs Crime Check TV and the NGO he said “ She had been brought in a day earlier. When I asked her what had brought her there, she told me amid sobs that the judge who convicted her asked her to pay a fine of GHC 1200 or in default serve five years in prison for biting the hand of a family member in a fight. As someone who earns GHC 120 a month for working on a refuse dump site, she couldn’t raise the money, so had to go to prison in her state, leaving her two kids at home. But the question is – Did she deliberately bite the hand of her accuser? Ama says she was rather pushed down by her accuser and her children, and mercilessly beaten for daring to ask her why she had beaten her little son. In the process, she bit her hand to free herself from the pain she was going through. Sadly the judge who sentenced her did not allow her to narrate her side of the story. At times I wonder whether some of our judges have the milk of human kindness in them. You jail a poor innocent girl without asking for her side of the story and expect her to deliver the unborn baby in prison? Sad!!!!! We at Crime Check Foundation will do all we can to have Ama Nima released from Prison”

Later he posted another development “After we shared the story of Ama Nima from Kumasi Central Prison three weeks ago, many were those who expressed disgust. The thought of being sentenced to five years in prison because she couldn’t pay a court fine, after being beaten by other family members was difficult to grasp. But God works in mysterious ways! After her release from prison, I asked Ama what she wanted to do for a living. She said with 500 cedis, she could do a lot. Little did she know we at Crime Check Foundation had other plans for her. Through the donations we received from some good Samaritans, we rented a flat in Accra for Ama and her two children and moved them in. She was so surprised she wept all day. A dustbin attendant now moves into a plush accommodation paid in advance of four years. But the biggest surprise was on its way! This afternoon we showed Ama her big provisions shop and gave her a sum of seven thousand Ghana cedis. Your guess is as good as mine! It was tears and tears and tears of Joy! To all those who helped change the circumstances of poor Ama Anima, may the Almighty God richly bless you. Watch the full video next week Sunday with full acknowledgment of all those who helped. From our Crime Check Team, we thank you all!!!”