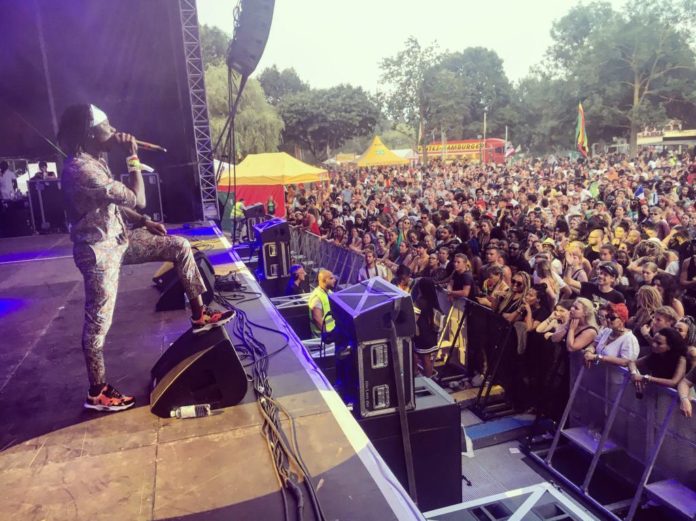 Seeing Stonebwoy’s progress over the years has been incredibly inspiring for me. From our first interview 8 years ago in the studios of Vibe FM (Accra-Ghana), to watching the Jamaican media frenzy around his recent gig at Jamaica’s Reggae Sumfest. it’s all so surreal!

I was fortunate enough to get him on the phone for a short interview before he jetted off to the States for the next round of gigs, and in 10 minutes we managed to cover quite a bit.

Check out a summary of the interview below:

On his recent success on international platforms, from Budapest’s Summerjam, to Zurich and straight to Jamaica, I asked him how he felt and what it meant to him:

Stonebwoy:  It’s an incredible feeling Antoine. I’m humbled and grateful by it and it means a lot not only for me but for Ghana. These stages I find myself on pave a path for other dancehall and reggae artists from Ghana. I go through a lot to get ready for this shows, musically and mentally, so when I deliver and it all goes well, I thank God for making it happen.  These shows are huge and require you to make a mark as an African artist. If only you knew what I’ve sacrificed to get this far. It hasn’t been easy, but the consistency and push is what’s got me here.

On the Jamaican media frenzy around his performance at ReggaeSumfest and presence in Caribbean country, I asked what he thought he did that’s got their attention and respect across board:

Stonebwoy: Everything came together to create that peak. My work and profile speaks for itself. The treatment comes with the level. These guys are really into reggae and dancehall, so they do they’ve done their research and seen the numbers. 17 appearances on the billboard 100 and the music I’ve been putting out and moves across the world, nominations and wins in the BETs. It’s not about the hype or that one hit song. A lot of work was put into this is and its good to see the respect and necessary attention it’s being given. Again very inspiring and encouraging experience for me.

On meeting Damian Marley and striking a chord of familiarity, I asked how that must have felt being recognized by one of reggae music’s world best, if not the best:

Stonebwoy: It was an honor. Damian Marley I can say is like the Bob Marley of our time. It’s definitely a dream come true and a testament to the hard work and consistency I’ve put into my music. The connection started some time back when he produced a song for Kabaka Pyramid called borders which i featured on. One thing led to another into that time of meeting him. This is just the beginning, hopefully more doors open through this.

On the deal with Universal Music, I asked him what exactly it means for him now and if it in any way affects his creative liberty and affects his deal with Zylofone Music.

Stonebwoy: Not at all. The deal with Zylofon still stands along with my creative liberties. What this deal is, is me licensing my music to Universal for global distribution. Of course, that gives us the advantage of further reach, resources and connects to get my music heard around the world. There will definitely be more collaborative efforts even with Universal, in the direction my music should take with regards to the targeted demographics, but that’s something that rather adds value to my music.

On taking Kelvinboy along with him on this global platforms, I asked him how Kelvinboy was taking it.

Stonebwoy: He’s in a very good position you know. A lot of us starting out didn’t get that chance. I never had the chance to feature or perform on such big platforms starting out, but he does. It’s my hope that he leverages on this to do even bigger things and reach further than this.

Stonebwoy ’s international recognition is a result of years of hard work, consistency and focus on building a global brand that would leave a legacy in the genre of dancehall and reggae music. Right after our interview he left for the States. He is due for another gig in Italy in the coming days. I’m sure more Stonebwoy fans stand proud with his progress.

Wishing him nothing but the best in gigs to come and on his new deal with Universal Music.

The writer is a Presenter at Accra-based LIVE 91.9 FM.