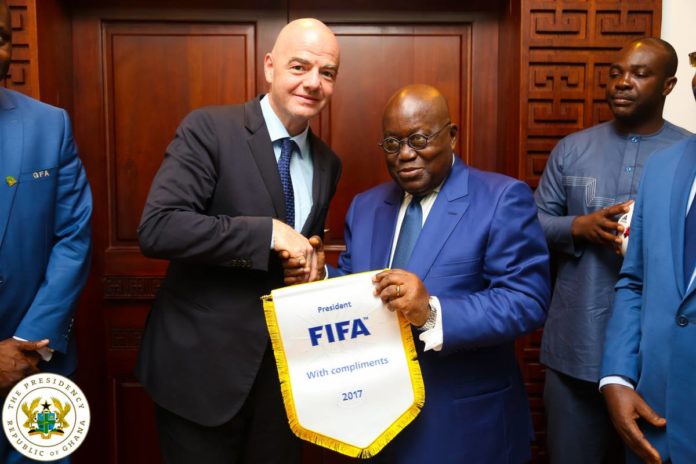 FIFA President Gianni Infantino has extended an invitation to the president of Ghana Nana Akufo-Addo, to watch the finals of the 2018 World Cup in Russia.

President Akufo-Addo will use his official visit to discuss the current crisis in Ghana football with the top hierarchy at FIFA.

Football activities in the West African state have been halted following a court action by government seeking for the dissolution of the Ghana FA.

This is after the screening of an undercover investigation which exposed acts of corruption by referees and leading members of the Ghana FA including Kwesi Nyantakyi who has since resigned as President of the association.

CAF and FIFA have since appointed a two-member liaison team to oversee the affairs of football in particular reference with the national team duties.

President Akufo-Addo who remains strong in his resolve to dissolve the GFA in order to sanitize the sport will now have an opportunity to make his case before the FIFA President.

Definite measures on the way forward of Ghana football are expected to be announced after the meeting this weekend.

THE HIGHEST WEDDING! Sarkodie shares photos of his wedding

I stand with KATANGA and CONTI and all other affected halls...