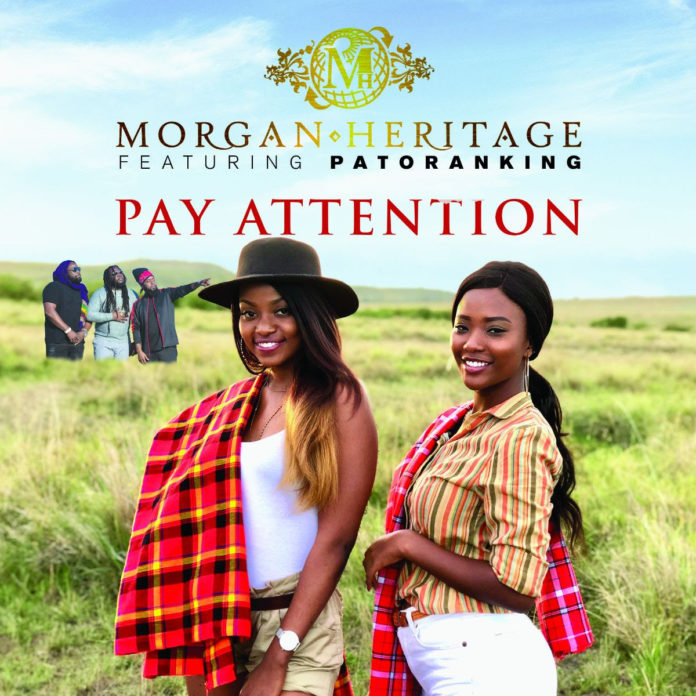 “Pay Attention” records as the second single from the celebrated Jamaican Reggae Group’s upcoming album due for release soon.

Patoranking, Nigerian Superstar was featured on the song. He flew in from Nigeria to Kenya to film with Morgan Heritage for at least 4 days on set.

Mojo, Group Member of Morgan Heritage in an earlier statement says, “We didn’t know this song would be a song so emotional that speaks to men and women around the world, who have been through one thing or the next trying to maintain a healthy relationship. Which can easily be lost because we just simply didn’t Pay Attention,” adding, “For almost two years we’ve been working on the new album and since setting up our roots in Kenya we long looked forward to filming a music video in Kenya and this is it for the new album.” Gramps Morgan adds onto their collaborator, “While vibing to the track, we knew that Patoranking was the perfect fit. He’s an artist we’ve been following and have loved the progress he’s made in his career over the last five years.”

Excited Billboard charting superstar, Patoranking on his comments about the new project also says, “I am very happy that we get to release Pay Attention with my brothers. I loved the music shoot and this song I know will resonate with all our fans around Africa and Jamaica.”