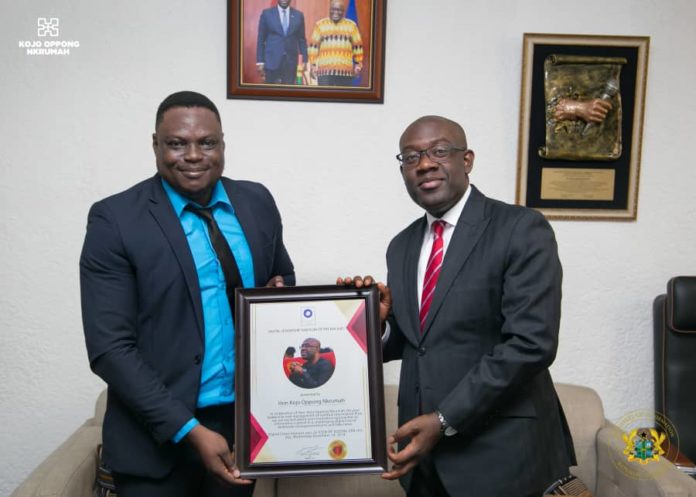 The Minister for Information, Kojo Oppong Nkrumah, has been honoured by the leadership of the Digital Corp group for what they describe as “his excellent ways” of managing and disseminating government information to the public.

He was presented with a plaque which read “In celebration of Hon. Kojo Oppong Nkrumah, for your leadership and management of national information flow: We are excited about your innovative approach to information control in a challenging digital era of deliberate misrepresentations and fake news. Digital Corp honours you, an Icon of Digital era this Day Wednesday December 18, 2019.”

Founder of Digital Corp, Kelly Nii Lartey Mensah who led a delegation to the office of Mr Oppong Nkrumah, said after the presentation that it was important for the group to have recognised the work of the Minister especially in an era of deliberate misinformation by mischievous persons with diabolic agenda against the state.

Mr Lartey Mensah further explained that a critical assessment of the work of Mr Oppong Nkrumah who is also the Member of Parliament for Ofoase-Ayirebi in the Eastern Region of Ghana, depicts a minister of information who has finesse in responding to fake and skewed media reportage about the government and other state bodies.

Since his appointment as the minister of information, he has adopted swift and modern ways of managing public information and also responding to what can be described as false media reportage on government activities.

For instance, he tactfully and systematically reacted to the Multimedia’s “Militia in the Heart of the Nation” documentary, a documentary which was subsequently described by the National Media Commission (NMC) as misleading and a misrepresentation.
To that end, Mr Lartey Mensah said there was the need to “recognize him for his good works in the area of public information management and dissemination, to encourage him to do more and to also urge other government officials who are mandated to manage government information to work up to expectation.”

Mr Oppong Nkrumah who is also serving as a member of the Finance and Constitutional committees of the 7th Parliament of Ghana, has background in banking and finance, journalism and law.

Receiving the plaque in his office, he expressed gratitude to the leadership of Digital Corp for honouring him.

He assured that his outfit will continue to disseminate accurate government news and information timely in order to keep the governed well informed on how their taxes are being utilized.

The other officials of Digital Corp, a group of digital writers and techpreneurs, who witnessed the presentation of the plaque were Laud Nartey and Lord Kingful.