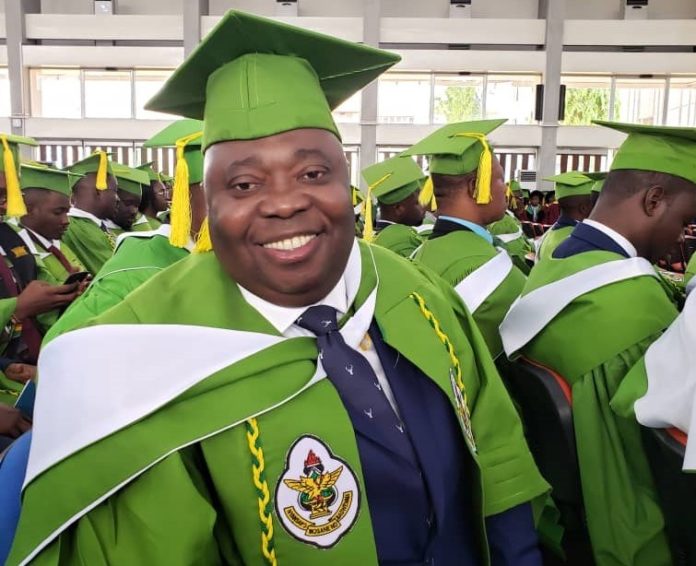 Mr. Adinkra is graduating with a Master of Philosophy (MPhil) in Communication Design after successfully presenting his dissertation on ‘Corporate Visibility of Radio Stations in Kumasi. An Exploratory Study’ to the College of Art and Built Environment.

He also graduated from the same University years ago with Bachelor of Arts Degree in Graphic Design and was adjudged the best in the Planned Parenthood Association of Ghana (PPAG) logo contest while pursuing his studies.

Aside from being versatile behind the microphone, Kwame Adinkra is noted for being academically gifted in his field of study which has been manifested in a number of projects he has been associated with.

The musician is the current Chief Operating Officer (COO) of Angel Broadcasting Network (ABN) owned by Millionaire Dr. Kwaku Oteng after being unveiled weeks ago.

According to sources close to ABN, Kwame Adinkra will also double as Business Manager for Pure FM and its morning show host and set to commence work on Monday February 4, 2019 barring any last minute changes.

Kwame Adinkra which has become a household name when it comes to radio and Morning Show within the Garden City and beyond has made significant progress in the media landscape.

With over two decades as a broadcast journalist, his professionalism in the discharge of his duties has earned him the respect from leaders of the various political parties in Ghana.

Kwame is undoubtedly the face of radio and entertainment in Kumasi who appeals to kids, young and the old in society. He is seen as a role model for many young people in the country.

He respects tradition and culture and has a firm root at the Manhyia Palace. He is a member of the Five-member planning committee set up by His Royal Majesty Otumfuo Osei Tutu II (King of Asante) to work out the modalities of Otumfuo Charity Foundation Teachers Award.