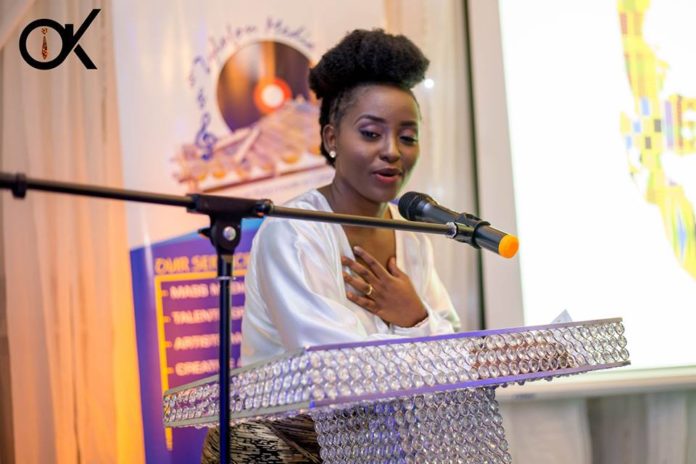 Wife of Rapper and Hiplife artiste Okyeame Kwame, Annica Nsiah Appau has lashed out at highlife artiste Gyedu Blay Ambolley for maliciously lying confidently about her husband claiming he received GHS50,000 from Bice Osei Kuffour(Obour) as a loan from the Creative Arts Fund which he did not pay back.

Gyedu Blay in a recent interview on 3FM which was shared with TV3 Instagram account alleged that the former president of Musician Union of Ghana (Musiga) Bice Osei Kufuor, popularly known as Obour shared the union’s GHC 2M funds among his pal musicians and that Okyeame Kwame took GHS50,000 but Annica in an instagram post has described Gyedu Blay’s statement as palpable falsehood aimed at tarnishing her husband’s image.

In setting the records straight, Annica revealed that for the whole one year that Okyeame Kwame worked for MUSIGA, he received less than GHS3,000.

“It is a shame that it must come to this; that a person my husband calls uncle, mentor, Gyedu Blay Ambolley (a person old enough to be his father😒), can perpetrate lies about his reputation and character; Current case in question being his interview at 3FM, stating that he has proof (“documents”), that my husband, received GHC 50,000 from Obour @obourbice as a loan from the Creative arts fund of GHC 2 million which he did not pay back.🙄

Apart from the fact that this statement is a total fabrication and untrue I am in utter shock that a person old enough to be my husband’s father who should know better can maliciously lie confidently about something that has never happened.

Whoever cares to know must note that for the whole 1 year or so that he worked at  Musiga, the net total of all monies he was given for driving to meetings, sharing his experiences and late night brainstorming was less than GHC 3000. This is because, the chartered accountant that the Musiga administration had hired would not work unless she was paid GHC 400 more to what she was already getting. My husband and uncle Rex Omar forfeited the GHC 200 each a month that they would have gotten as stipend so that the accountant could be paid professionally. My husband paid the Ghana cedi equivalent of USD 5000 as tuition for his Masters Degree in Marketing Strategy at the University of Ghana Business School to acquire the knowledge he shared with Musiga out of love for the Union during his time of work at Musiga.

It is a chronic addiction in this country that SOME people spew black ‘clouds of exhaust’ without proof, calling it “my truth” 🙄🙄🙄 This is NOT our truth. It is THE TRUTH!!!

IF U’RE LOOKING FOR AN HONEST MAN, IT IS MY HUSBAND.“

Stop pestering me with marriage proposals, I’ve a man who satisfies...

Don’t go on a demonstration -Nana Appiah Mensah to people of...