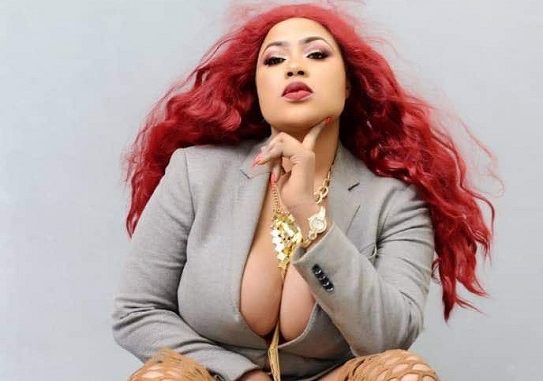 Ghanaian actress, Ella Mensah has pleaded with her fans not to take her being in love with a married man comment serious because she made those revelations under the influence of alcohol.

The ‘Crime to Christ’ actress made a shocking confession about dating a married man.

Explaining how she ended up with a married man, she said her lover posed as an unmarried man earlier in the relationship only for her to find out later that he was married.

The actress however asserted that she was deeply in love with him and hence cannot do anything about it now.

But in an exclusive interview with Sammy Kay on Neat FM’s “Showbiz Time” , Ella Mensah made a sharp u-turn stating that, she is apparently not dating the married man although she has fallen for him.

She concluded that, whatever statements she made at actress Bibi Bright ‘s traditional wedding was under the influence of alcohol,hence should not be taken serious.

“It was Bibi Bright’s wedding and I was served with cocktail with little alcohol so I don’t even remember most of the things I said, pls am not dating any married man” ..she said.

“What I meant to say is that , I felt affection for a married man after he proposed, but I can’t date him because his married, Ghanaians should forgive me pls “ …the ‘Playboy’ actress concluded.

Man killed by a security guard for refusing to wear a Nose mask in...

‘Until you get married, be stingy with money’ – Reno Omokri...