Nigeria’s President  Buhari has set up an enquiry into the alleged ‘reckless’ spending by top officials of the Nigeria Football Federation (NFF) at the ongoing FIFA World Cup in Russia.

The Super Eagles failed to equal their Brazil 2014 World Cup feat in Russia, following their 1-2 defeat from the struggling South American side, Argentina, on Tuesday.

An official of the sports ministry told The Guardian in St. Petersburg yesterday that the Presidency was not happy with the ‘bad’ stories emanating from the Nigerian camp in Russia, adding that Sports Minister, Solomon Dalung had been given strict instruction to look into the various issues.

“The minister saw all these things coming even before we came to Russia. That was why he instructed the NFF to be mindful of the number of people they brought to Russia. Now the Presidency is not happy with the stories coming from here in Russia and the minister has been directed to carry out a thorough investigation into the alleged spending by the NFF in Russia,” the official said.

Meanwhile, the President of the NFF, Amaju Pinnick, was said to have embarked on a ‘desperate’ move to secure another term in office.

A source close to Pinnick yesterday told The Guardian in St. Petersburg that one of the steps he took to pacify some angry members of the NFF on Wednesday was to give his personal credit card to the Secretary General of the NFF, Mohammed Sanusi, to settle their hotel bills amounting to $30,000.

“But that is even against the financial rules because it could be used against him later, especially now that everyone in high places is against him,” the source said.

“Amaju just want to return to the football house in the August election, but I doubt if this move will save him because virtually all staff of the NFF and board members are angry with him. He always want to do everything alone, and that is not good for the system.”

All efforts to speak with Pinnick yesterday proved abortive, as he was said to have gone to officiate in another venue of the competition as a member of the FIFA organising committee. 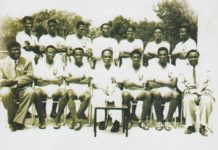 The Blood and Toil of Our Fathers: The Making of an African Football Powerhouse