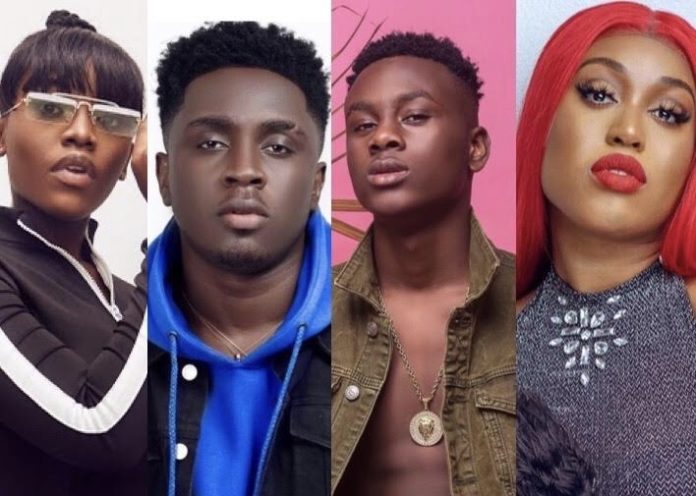 Every year, there a crop of Ghanaian acts who spring unto the scene and swoon music lovers with their craft, talent and hard work.

This list was sieved from a wider pool of young Ghanaian talents eager to establish themselves in the music industry and push their careers to the apex.

With two notable songs release to her name, Gyakie is very much an upstart. She possesses a searching voice that soothes and uplifts but more frequently invites introspection and melancholia. This is evidenced in her two hit singles “Never Like This” and “Control” Her voice and style has been likened to Grammy Award winning artist Rihanna. The three-minute video for her first single “Never Like This” encapsulates her music project and artistry. Her second single “Control” sets the tone for what we are to expect from this promising talent.

Camidoh comes through with his silky voice that will serenade and swoon you. His singles “For My Lover” featuring Darkovibes, “The Best” featuring Kelvyn Boy and “Yawa” identifies Camidoh as one to look out for. His style and lyrical dexterity on the songs in his catalog crystallizes the 26 year old’s reputation.

He has released Five songs so far: “Be Mine“, “Wavii“,”Questions“,.”Pretty Mama“, and “Homies“,  heavily influenced by Afro Pop, R&B and Rap. His amazing talent and vocal prowess fetched him a feature on his Idol Sarkodie’s “Black Love” album.

Rapper, Singer and Songwriter, Kofi Jamar is one of the young acts whose journey to the top has been saddled with struggles which is evidenced in his music. His singles “Mi Dey Up“, “Roll On” and “Asuoden” featuring Medikal details his readiness to climb to the top.

Larruso is a fast rising Ghanaian Reggae and Dancehall artste. His notable single “Killy Killy” thrust him onto public consciousness earning him a remix with multiple award winning artistes Stonebwoy and Kwesi Arthur. “Killy Killy”, his self penned single is receiving wide attention for its dancehall authenticity.

Singer Offei has that voice that serenades and soothes your soul. His silky voice on his Kayso produced single “Santorini“, is a love inspired song where he professes his feelings for a damsel he greatly admires.

The song is a perfect tune for all lovers who desire to show their partners all the beautiful places in the world in a bid to rekindle their love. Offei’s catalog consist of songs like “Body Whine“, “Human Being“, “Lowkey“, “Let it Go“, “Maria“.

After entering the Ghana Music scene last year, Fantana has positioned herself and craft well awaiting to take off in grand style. Her singles “So What“, “Girls Hate on Girls” and ” New African Lady” has enjoyed wide attention and it’s a confirmation of what to expect from her this year.

After going viral with the emotional version of the hit song “Imagine Say” which was produced DMB front man & Producer Dare Mame Beat, Imrana has become one of the young acts to look out for this year. His single “Imagine Say” received wide attention from music lovers which culminated into a remix with Legendary Dancehall artiste Samini.

He organised his own concert in Sunyani during the 2019 December Christmas festivities and he had a mammoth crowd at the concert with no A-List act billed on the concert. It goes a long way to send a message across that, he’s here and he’s one to look out for.

New Rap sensation, Kweku Smoke had an amazing 2019 and this year looks promising for him already. He started the year with a new release and he once again teamed up with his hype man Bosom P-Yung to release this Hip-Hop song titled “Airhu”.

His hit single “Yedin” featured multiple award winning artiste Sarkodie and its one of the popular hip hop joints of 2019. Kweku Smoke’s catalog consist of singles like “On Dem“, “Kwekuee“, “You Dey Talk” and others.

Seven months ago, when the song was first published, concealed amongst six other Trap joints on the Awiesu album, it had hardly rippled Chop Bar tattle, and was on the journey to becoming (or remaining) one of the world-wide web’s many secrets.

Yet, thanks to a merciless humour and flamboyant charm dispatched by the pink-haired eccentric in the now-famous video (available on the Flow Rhythms YouTube channel), coupled with the Internet’s open-handedness with rewarding content like this, the man has duly secured his fifteen minutes, and a cosign by the mighty Sarkodie.