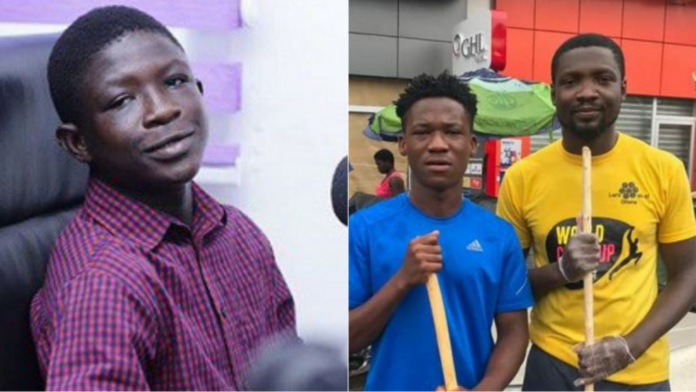 Emmanuel Nii Adom Quaye aka Strika has hinted in a trending video that he’s not being treated well by his management after being featured in the popular movie, Beasts Of No Nation.

He was seen begging on the streets for money and this has raised eyebrows but his manager, Kobina Sam has reacted to the news trending that he has neglected the boy who was placed under his care.

According to Kobina Sam who also starred in the movie as Agu’s father, Strika was given the same opportunity as Abraham Attah but he decided to go his own way.

In a Facebook comment, he explained that apart from Beast Of No Nation, Strika has been given other roles and nobody let him go back to the street thus “he has chosen that part of life.”

“He’s been given everything in this world… He was paid same as Abraham and we have managed to get him movie roles…
The producers didn’t let him go back to the streets after the movie. They sponsored his education at a Montessori school in cape coast with Abraham Attah… He is just being stubborn. Nobody left him in the streets. He was brought to a proper home… I know this for a fact cos I’m one of his guardians.
He lied to the guy who found him…
He has chosen that part of life.”

Strika was one of the child actors in the movie and played the role of a child who has been emotionally broken by war and whittled down to a mindless killer. He became a good friend of Agu played by Abraham Attah in the movie.

CRACKING THE WHIP! Stonebwoy, Shatta Wale banned indefinitely from the VGMAs, stripped off all...