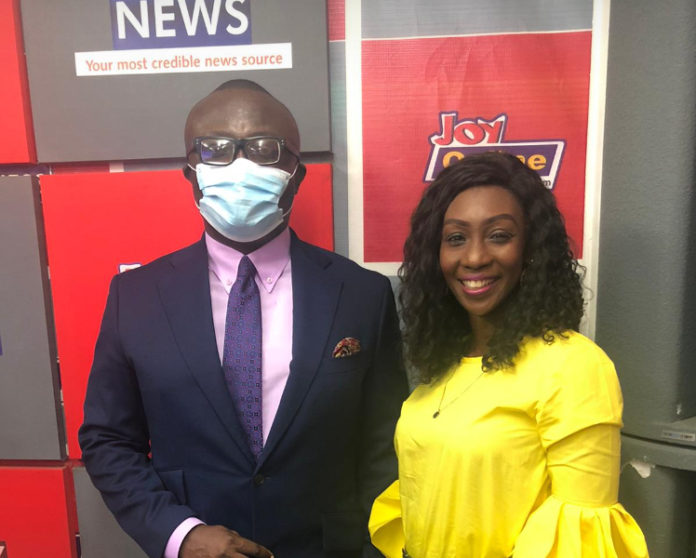 CEO of EIB Network, Nathan Kwabena Anokye Adisi popularly known as Bola Ray has joined the Multimedia Group and well-wishers to celebrate the host of Cosmopolitan Mix, Doreen Andoh as she marks 25 years on radio as a Broadcast Journalist and staff of the Multimedia Group.

Doreen Andoah was presented with a cake from EIB Network for her outstanding service and 25th Anniversary.

Reacting to working with JOY FM for 25 years, Doreen Andoh said on her Cosmopolitan Mix show, Monday morning that,

“It feels like I just started working with Joy FM, it doesn’t seem like 25 years at all.
Thank you, folks, I couldn’t have done it without the listeners, thank you to you all for the support, I’m so grateful”.

Doreen made her debut on radio, as a news anchor for Joy FM in 1995. Her love of music later drew her to deejaying which turned what she once considered as a hobby into a successful career in broadcasting.

That career in broadcasting has taken her through a series of hosting and co-hosting of programs on radio and television and eventually to her current position as the host of the, The Cosmopolitan Mix – a show she has hosted since 1995.

In June of 2001, Doreen received the Best Presenter of the Year Award – making her the first female to ever receive the award.

See Photos of Bola Ray and Doreen Andoh Below.