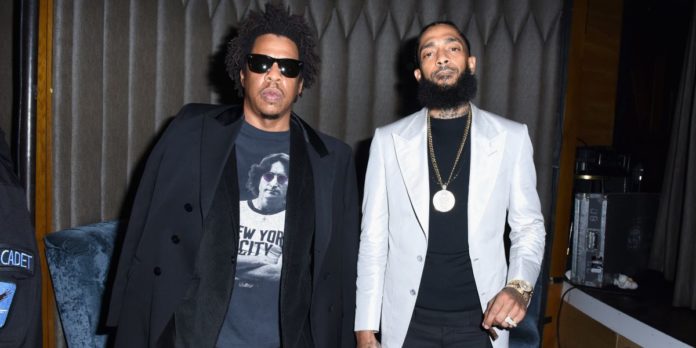 Roc Nation honcho Jay-Z was one among dozens from the hip-hop home of L.A.’s newest angel Nipsey Hussle to pay respects at his Celebration of Life service on Thursday (April 11).

In the midst of the Victory Lap rapper’s March passing, several fans looked to the Brooklyn-bred rap mogul, who shared a brotherhood with Nip, for his public words of . Jay kept away from social media to make his statement, and instead, saved his message of light and love to Nipsey for the Celebration of Life program. Posted by several attendees at the service, the letter circulated widely as Hov’s touching words reminded everyone of his go-getter mentality and earthly-impacting legacy.

OPENING THE LETTER WITH A WORD FROM DR. HOWARD THURMAN…

Hov reiterated the words championing the “existence of a new Black man.” Hov remembered Nipsey in one of his most inspirational greetings he’d approach him with. “Top of the top,” this is how Nip always greeted me in the morning as if he was reminding me that he was steadfastly holding on to the top of the top of his own life string and destiny!”

Hov praised his brilliance, soul curiosity that fostered his community and the entire world into ascension. “The outpouring of admiration is to the love and respect you’ve farmed,” he wrote. “Sleep well . The Marathon continues as a line of energy for all of us to consider.”