Rapper T.I has opened up on why he lied on his cousin Toot to escape jail.

T.I before fame was an armed robber.

He says he used to steal from shops and sell them in order to make a living for himself.

T.I said in one of their armed robbery escapades, they were caught and his cousin Toot got killed.

He said his lawyer advised that he lied on Toot in order to escape jail and after consultation with his late brother, he lied.

T.I was able to change his life through music and is now one of the celebrated musicians.

Here is the video of T.I admitting he snitched on his brother 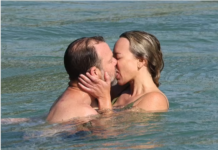